The Union Aerospace Corporation has been experimenting with teleportation technology on Mars’ moons Phobos and Deimos. After early successes, something goes wrong. It seems the scientists have opened a gateway straight to Hell. Phobos base is overrun with demonic creatures, and the whole of Deimos simply vanishes. A squad of marines is sent to Phobos, but all except one are quickly slaughtered. It falls to the surviving marine to grab some guns and strike back at the demons. id Software’s follow-up to their genre-defining Wolfenstein 3D, DOOM is another first-person 3D shooter: full-on action seen from the space marine’s perspective. Like Wolfenstein, the game consists of distinct episodes, playable in any order. The first episode, Knee-Deep in the Dead, takes place in the Phobos base and is freely available as shareware. The full game continues on Deimos in The Shores of Hell and culminates in Inferno, the final episode which takes place in Hell itself (the Sega 32x version lacks this episode). The basic objective in each level is simply to reach the exit. Since dozens of enemies stand in the way, the only way to get there is through killing them. Switches and buttons must be pressed to advance at certain points and often color-coded locked doors will block the way - matching keycards or skull keys must be found to pass. The game’s engine technology is more advanced than Wolfenstein’s, and thus the levels are more varied and complex. The engine simulates different heights (stairs and lifts appear frequently) and different lighting conditions (some rooms are pitch black, others only barely illuminated). There are outdoor areas, pools of radioactive waste that hurt the player, ceilings that come down and crush him, and unlike Wolfenstein’s orthogonally aligned corridors, the walls in DOOM can be in any angle to each other. An automap helps in navigating the levels. Stylistically, the levels begin with a futuristic theme in the military base on Phobos and gradually change to a hellish environment, complete with satanic symbols (pentagrams, upside-down-crosses and portraits of horned demons), hung-up mutilated corpses and the distorted faces of the damned. DOOM features a large weapon arsenal, with most weapons having both advantages and drawbacks. The starting weapons are the fists and a simple pistol. Also available are a shotgun (high damage, slow reload, not good at distances), a chaingun (high firing rate, but slightly inaccurate in longer bursts) and a plasma rifle (combining a high firing rate and large damage). The rocket launcher also deals out lots of damage, but the explosion causes blast damage and must be used with care in confined areas or it might prove deadly to the player as well as the enemies. Two further weapons in the game are the chainsaw for close-quarter carnage, and the BFG9000 energy gun, that, while taking some practice to fire correctly, can destroy most enemies in a single burst. The different weapons use four different ammunition types (bullets, shells, rockets and energy cells), so collecting the right type for a certain gun is important. The game drops some of Wolfenstein’s arcade-inspired aspects, so there are no extra lives or treasures to be collected for points, but many other power-ups are still available. Medpacks heal damage while armor protects from receiving it in the first place. Backpacks allow more ammunition to be carried, a computer map reveals the whole layout of the level on the automap (including any secret areas), light amplification visors illuminate dark areas and radiation suits allow travel over waste without taking damage. Also available are berserk packs (which radically increase the damage inflicted by the fists) as well as short-time invisibility and invulnerability power-ups. The enemies to be destroyed include former humans corrupted during the invasion, plus demons in all shapes and sizes: fireball-throwing imps, floating skulls, pink-skinned demons with powerful bite attacks and large one-eyed flying monstrosities called Cacodemons. Each episode ends with a boss battle against one or two especially powerful creatures. DOOM popularized multiplayer in the genre with two different modes: Cooperative allows players to move through the single-player game together, while Deathmatch is a competitive game type where players blast at each other to collect ‘frag’ points for a kill and re-spawn in a random location after being killed. The 3DO and Sega32x ports lack any multiplayer modes, though the other ports retain the DOS versions multiplayer to varying degree. The various console ports all feature simplified levels and omit some levels, enemies and features from the original DOS release. The SNES and Gameboy Advance versions of the game actually use different engines and hence feature numerous small gameplay differences.

This page in other language: Russian Chinese German Spanish French

Maybe a bit buggy, and is kinda literally broken. But it works and it’s not like it ruins the gameplay experience. It’s fairly playable. doom-box.jsdos (2.4 MB)

Thanks a lot! Sorry for delay, I will add your js-dos file to repository soon, just need to make some refactoring.

Unplayable. It lags so bad, it takes about 4 seconds to input. Tried on different devices. Still lags. I’m sure it works fine on PC, but there’s already PRBoom+ and other source ports you can use. Please fix this

I am working on it, hope it will work fine soon. Please try turbo mode if it works for you?

Now it should work fine also on android if you install Dos.Zone app. It supports hardware acceleration starting from 1.037.

Can you make the mouse work or is that impossible to do?

lets keep this disscussion board about doom please 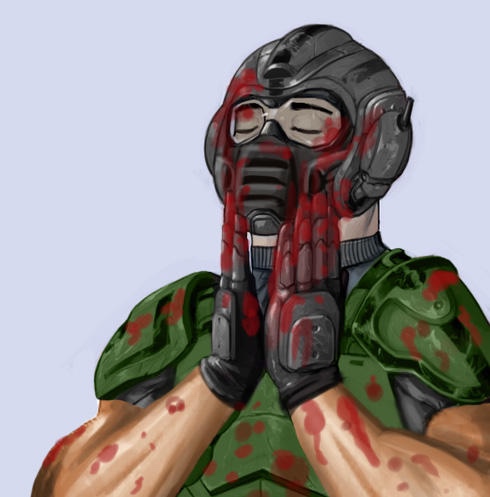 Hi. I have plan to add mouse, but later. Please be patient. Thank you for your interest!

Thank you very much.

I don’t know what you did, but I’m sorry to say nothing seemed different.
Also, I can’t download anything because I want to play this on an iPad.
I can just download Delta Touch, and play DOOM with mods on my phone.

This portal is about playing DOS games in browser, so no need to download anything. Just follow the links and play doom without install. This is original DOOM without any changes. However mobile controls is not so good, I am working on it.

You just said I should download dos.one app for faster experience, but the problem is, I can’t download anything. Also still it doesn’t run well. Idk if it’s just my device, but I tried it on many devices and still lags. Btw, Wolfenstein 3D works well, and doesn’t lag.

Its not your device its dos.one it doesn’t run well on mobile.

That’s strange. Why would (insert dev of dos.zone here) even make mobile controls, if it doesn’t run well?

I have no idea why they would do that.

prob because just to add mobile controls to be “mobile friendly”

Sorry, I don’t understand you. Did you install the app or not? What exactly problem do you have? I tested app on many devices and it works well. Maybe you found some bug, I don’t know. Do you have hardware acceleration enabled in dos.zone app?